The Fourth of July has come and gone but the sting of what it means lingers as I continue to read blog (great one from a Black man’s perspective) after blog (another great perspective from a “conscious American”) validating – even exacerbating – the pain. Our collective awareness of the fragility of Black people in today’s society has never been so heightened, so up close, so real.

For me, this journey began on the morning of America’s 241st birthday as I spent four hours reading a 165-year-old speech given by self-educated former slave Frederick Douglass. As a Black History minor, I’m sure it had crossed my path before now, but middle-aged me absorbed Douglass’ words like a caged bird inhaling its first unfettered air during its inaugural flight. Indeed, it was liberating, frightening, and overwhelming.

”The fact is, ladies and gentlemen, the distance between this platform and the slave plantation, from which I escaped, is considerable—and the difficulties to be overcome in getting from the latter to the former, are by no means slight. That I am here to-day is, to me, a matter of astonishment as well as of gratitude.”

While reading his words I imagine Douglass making an appeal to me to join the fight to abolish the enslavement of men (I know by men he means human beings). I’m blown away by the 165-year-old charge that fits snugly into today’s narrative of mass incarceration, a dysfunctional education system, and generational poverty—the vicious trifecta born of the vestiges of slavery and repackaged into a type of modern-day enslavement.

We live in a place founded on the principles of freedom and patriotism and Douglass was calling out the hypocrisy during America’s infancy, as a spry 76-year-old nation. But as a more mature country, the dissonance between the bedrock from which this country sprang and how it treats its Black citizens has not grown up, it just looks different. 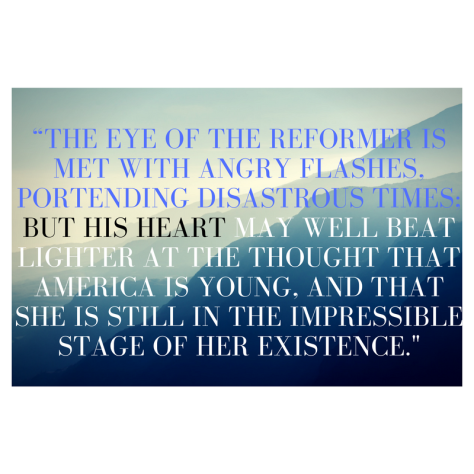 I visualize Douglass standing before hundreds of white men, direct beneficiaries of the Declaration of Independence, captivating them with his expansive vocabulary while taking them on a wild journey from the speech’s mild start to its harsh finish.

Douglass fattens up the audience with celebratory high-caloric affirmations only to set them up for a constitutional slaughter. He lures them, earns their trust with high praise for their forefathers’ vision and then he lowers the hook using against them the very declaration designed to foster freedom all the while promoting the most peculiar of institutions. Douglass relentlessly scolds the framers and their benefactors– letting no one off the hook.

I’m convinced this is the most brilliant and courageous act against domestic tyranny in the face of domestic tyrants in the history of America.

Picture Douglass—a former slave breaking the law by teaching himself to read and write and escape slavery—speaking his truth and that of his sisters and brothers in bondage to the very group responsible for the injustices. Wild, isn’t it? Incidentally, this visual reminds me of parents who take time from their families—the daily grind of dinner and homework—to appeal to dispassionate, politically motivated elected officials. But I digress.

In the following excerpt, Douglass blasts the institution of slavery and, I suspect, extinguishing any remaining celebration left in the Patriots on that day. Though he speaks of slavery, the unspoken root of the issue is the wicked inspiration behind America’s enslavement of Blacks — racism.

”It destroys your moral power abroad; it corrupts your politicians at home. It saps the foundation of religion; it makes your name a hissing, and a by word to a mocking earth. It is the antagonistic force in your government, the only thing that seriously disturbs and endangers your Union. It fetters your progress; it is the enemy of improvement, the deadly foe of education; it fosters pride; it breeds insolence; it promotes vice; it shelters crime; it is a curse to the earth that supports it; and yet, you cling to it, as if it were the sheet anchor of all your hopes.”

We are all operating within, around, and in opposition, to institutions that have hate baked into their foundations. So, it is not surprising to me that Frederick Douglass, a man deceased for 122 years was trending on Twitter on July 4, 2017. Douglass’ 1852 speech, “What to the Slave Is the Fourth of July,” resonates with millions of Americans who find themselves in opposition to the nation’s current political leadership.

The potential loss of healthcare, infringements of rights of those who just want to love and live freely, and the attack on the very institution that informs the American public of these issues, has introduced to some and validated for others the house that hate built. Today’s Americans resonate with the plight of a former slave fighting for others’ freedom at the risk of sacrificing his own. Crazy, right? Not really. The current political reality heightens our awareness of the vulnerabilities of millions of Americans and forces community across lines of race, sexual preference, income, religion, and education.

“What, to the American slave, is your 4th of July? I answer: a day that reveals to him, more than all other days in the year, the gross injustice and cruelty to which he is the constant victim. To him, your celebration is a sham; your boasted liberty, an unholy license; your national greatness, swelling vanity; your sounds of rejoicing are empty and heartless; your denunciations of tyrants, brass fronted impudence; your shouts of liberty and equality, hollow mockery; your prayers and hymns, your sermons and thanksgivings, with all your religious parade, and solemnity, are, to him, mere bombast, fraud, deception, impiety, and hypocrisy—a thin veil to cover up crimes which would disgrace a nation of savages. There is not a nation on the earth guilty of practices, more shocking and bloody, than are the people of these United States, at this very hour.”

Check out these what these bloggers have to say about what July 4th means to them:

What to a Slave Descendant is Your 4th of July?

What to the Chicago Principal is Fourth of July?

What to the Conscious American is the 4th of July?

If You Are Silent About My Oppression, You Are My Oppressor! The Hypocrisy of the Status Quo!

Independence Day: More than a Barbeque