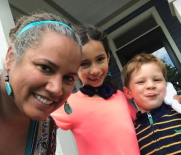 Guest Blogger Shani Jackson Dowell shares her thoughts about a world where parents are doing the best for their children while navigating systemic isms and the age-old battle against others’ judgment.

Parents, you know we’ve got all kinds of problems to worry about. But feeling judged for the kind of school we choose for our children shouldn’t be one of them.

Just last week I had an issue that sucked up my time and attention for the better part of the week.

It was the third day that week my eldest child claimed sickness so she didn’t have to go to her summer program. She is a talented actress, I should say—so good that I was doubting myself. Maybe she actually was sick? Maybe I should keep her home?

The program she is in seems like it should be perfect — academically stellar, beautiful setting. But for some reason that week she had been struggling and claiming to be sick for much of it.

By day 3 of this parenting fiasco I was enlisting help — asking the person I was meeting with at 10 am for his wisdom on the subject as the father of three. Should I make her go to school? How should we handle this?

And as a parent I was stressed. Is something wrong? Is it social? Is it a teacher? Is it the content? The truth is, it was probably a little bit of all of it to some degree. As we dug into it was a little bit of everything. And eventually, she got passed it.

No Time For Judgment

The more I talk to other parents about the issues they’re dealing with and the more I read stuff about school choice all over the news, the more I realize that nobody’s got time for the added stress of feeling judged for the kind of school we choose for our kids.

We have to change this. I have had the disheartening experience of talking to multiple parents who told me when they were looking for schools, “I really thought this option would be the best for my kid — but we just don’t want to be known for sending our kid to a [insert type] school.”

“We Don’t Have Many of Those Here”

And I just think about if my parents had heard a chorus of judgment weighing on their minds when they were considering the best school options for me. When we moved to Houston they called around for the best public elementary schools. The one that we ended up going to was going to be a 90 minute bus ride each way from our house — and when my mom called the school to find out what the experience would be like for a Black child there, the coordinator of the program I was entering misunderstood the question and replied, “you don’t have to worry about that. We don’t have many of those here.”

My parents had enough stress trying to determine which would be the least damaging option to their kids — an academically weak school (that could also have been not welcoming to a Black child) or an academically strong school (that likely would not be welcoming to a Black child). To then layer on some kind of social stigma to their decision making would create unneeded pressure. Yet this is what we do to parents all the time — perhaps most to those with the least options.

The jobs of parenting and schooling are hard enough. Let’s give each other grace on the school type judgment. It reminds me sometimes of the shaming that can happen around feeding your child in the first year (breastfeeding or formula) or parents who choose to stay at home full time with their kids or work full time.

Let’s just assume that everyone is doing the best they can for themselves and their families.

And leave the rest of the time to stress about figuring out if our kids are actually sick or not.

4 thoughts on “Back to School Nashville: Parents Got 99 Problems…The Type of School Ain’t One”